This river has three names, but each means “white water”. In the lower reaches it is called Chagan-Uzun. Behind Beltir, above the confluence with Taldur, Chagan-Uzun becomes simply Chagan, and in the origins it is Akkol. Up the Chagan goes the main part of the route.

The first thing that strikes about the Chagan Valley is the mountain massif on the left bank of the river, along which the road runs. The place is unordinary, even mystical. Pyramids and towers of the fancifully weathered rock have merged into a solid wall. Change of colors is dramatic and sharp: from dark steel to light ocher. Like a gigantic fortress that stands over a wide river valley, mountain massif seems to guard the rest of the ancient burial mounds located at its foot.

But very soon the valley narrows and the road begins to climb up the mountains. The river is always somewhere nearby, but quite often is hidden behind slopes and rocks. There is no other way besides the one which goes along the river, as it is laid straight through the watershed ridge. The road changes with every kilometer: first it goes through rocks, then along the placer of colored stones, then between rounded hills, then along a narrow fault in a giant monolith… On the way to the place there will also be “curly” cliffs, “sheep’s foreheads” (geological term), and, of course, petroglyphs.

The whole path through the mountains is like an attraction with changing pictures. And the weather is changeable just like landscapes. If on the way you were caught in the rain, do not be discouraged – in fact, you have a unique opportunity to get to the carnival of magnificent colorful rainbows in the valley of the White River, believe me, this is an incredible sight!

At the foot of the Beltirdu ridge, which cuts through the space like a gigantic ship, two rivers, running along both sides of the ridge, merge into one. They form the Chagan Rivera along which we have been climbing all this time. From the viewport there is a terrific sight of the confluence of Karaoyuk and Akkol – the black and white rivers. Our further path lies, as it is easy to guess, up the Akkol, to the lakes of Karakul and Akkul. One – black, with transparent spring water, which gains its blackness from a dark breed of a lake bowl. The other lake lies on the path of the milky-white glacial Akkol – it fills the deepening of the valley under the smooth, almost steep slopes of Beltirdu. And – what you couldn`t expect to see here – dunes of white sand, stretched between the two lakes. How do you like the idea of lying on the sandy shore of a mountain lake? 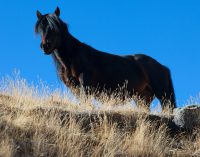